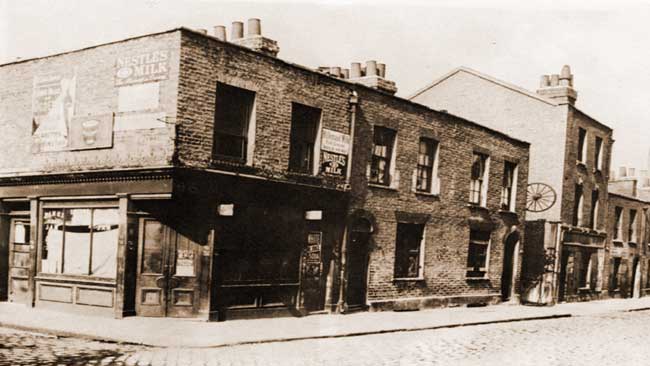 It was in Dutfield’s Yard off Berner Street on the night of 30 September 1888 that the body of Elizabeth Stride, or ‘Long Liz’ as she was also known, was found. Just before her death, she had been seen on Berner Street with a man described as being five foot seven inches tall with a small dark moustache and wearing a dark overcoat, a hard, felt deerstalker hat and dark clothing. But was he the Ripper?

What happened in Dutfield’s Yard on Berner Street in relation to the Jack the Ripper crimes?

The murder of Elizabeth Stride was the first of two murders committed on the night of 30 September 1988. Her body was found in Dutfield’s Yard, which is located just off Berner Street. It’s thought that her killer had been disturbed during the attack as, although Stride’s throat had been cut, her body had not been mutilated like the other Ripper victims.

This lack of mutilation caused some to doubt whether Stride was a victim of the Ripper at all. However, the fact that another murder was also committed in a different part of town on the same evening led many to believe that the Ripper had been disturbed and needed to finish what he had started by killing again.

The most important witness to the crime was a man called Israel Schwartz, who turned down Berner Street at 12.45am and noticed a man walking ahead of him. The man stopped to talk to a woman standing in the gateway of Dutfield’s Yard who he later said was Elizabeth Stride.

As Schwartz looked on, the man started attacking the woman and she screamed three times. Schwartz believed this was a domestic attack so crossed the road to avoid getting involved. The body of Elizabeth Stride was later found by a man called Louis Diemschutz, who turned his horse and cart into the yard and saw Elizabeth’s body lying on the ground.

Where is Berner Street and Dutfield’s Yard?

Dutfield’s Yard was a narrow yard situated between No. 40 (the International Working Men’s Educational Club) and No. 42 Berner Street. These days, Berner Street has been renamed Henriques Street after a local benefactor and the housing on both sides of the street has been cleared to make way for a school.

Henriques Street is a narrow street leading in a north-south direction off Commercial Road, Whitechapel, in the London Borough of Tower Hamlets. The closest tube station to Henriques Street is Aldgate East, which is approximately a 5-minute walk away. Local attractions include Whitechapel Gallery, Fotografiska London, which is the city’s only permanent photography exhibition, and the nearby Brick Lane.

What is Dutfield’s Yard in the present day?

Berner Street was renamed Henriques Street and Dutfield’s Yard was demolished to make way for a new primary school called the Harry Gosling Primary School. Dutfield’s Yard would now be somewhere in the middle of the school playground.

How has Berner Street changed since 1888? 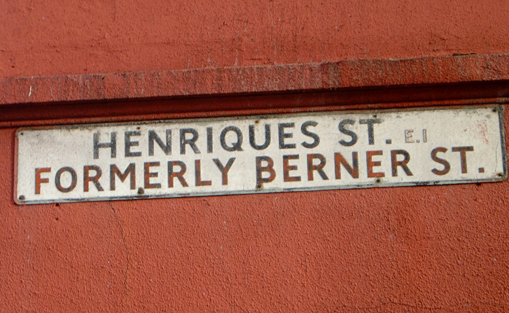 In 1888, Berner Street contained a variety of buildings, but it was predominantly residential and had a row of houses on the east side which was broken by Dutfield’s Yard. In 1909, part of Berner Street and all of Dutfield’s Yard was redeveloped to make way for a new school, now the Harry Gosling Primary School. In 1961, Berner Street was renamed after a local benefactor called Basil Henriques. Both the old and new street names were displayed at the Commercial Road end of the street until 2006.

Robbed At A Common Lodging House

The Jack the Ripper murders certainly did expose the conditions in some of the common lodging houses of Spitalfields, which were frequently portrayed as being little more than dens of iniquity by the Victorian media. It cannot be […]

The Homes Of East Enders

The murder of Alice Mackenzie took place in Castle Alley, off Whitechapel High Street, in the early hours of the morning of the 17th of July, 1889, and the inquest into her death took place over the course […]