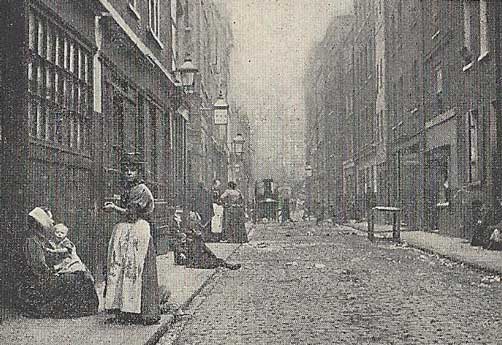 In 1888, Dorset Street had a reputation for being one of the most lawless thoroughfares in London, so much so that local police constables would only go down it if they were 3 or 4 strong.

Regardless of its reputation, it still came as a huge shock when the horrifically mutilated body of Mary Kelly was discovered in Miller’s Court, Dorset Street, on 9 November 1888.

However, Dorset Street had already gained a Jack the Ripper association, because of Annie Chapman, the second victim, who was murdered on 8th September 1888. Although her body was found in nearby Hanbury Street, she had, in fact, been staying at a common lodging house in Dorset Street prior to her murder.

What happened on Dorset Street in relation to the Jack the Ripper crimes?

One of the residents of Dorset Street was a 25-year-old called Mary Kelly, who had been renting a room in Miller’s Court for the eight months prior to her death. She had been living with an unemployed fish porter, which meant she had resorted to prostitution to pay the rent.

Early in the morning of 9 November 1888, Mary had a brief conversation with a labourer named George Hutchinson. She continued to walk down the street where he saw she was tapped on the shoulder by a well-dressed stranger. He said something and they both started laughing before walking down Dorset Street arm in arm.

Hutchinson believed the presence of such a well-dressed stranger in the area was suspicious, so he followed the pair until Mary led the man into her lodging house at Miller’s Court. Here, Hutchinson stood waiting for 45 minutes but when no one emerged he went on his way.

At 10.45am, Mary’s landlord sent his assistant to Miller’s Court to ask her for the rent as she was 29 shillings in arrears. After knocking on the door and receiving no reply, he looked through a broken window only to see a sight of unspeakable horror. Mary Kelly had not only been killed but she had also been almost completely skinned. She is believed to have been the final known victim of Jack the Ripper.

Where is Dorset Street?

Dorset Street was situated at the heart of the Spitalfields rookery in the East End of London. Today, in the area where Dorset Street and Miller’s Court used to be, there’s a nameless thoroughfare that squeezes between the White’s Row car park on one side and a row of industrial units on the other.

The closest tube station to the site of Dorset Street is Liverpool Street, which is just a few minutes’ walk away. Nearby attractions include Christ Church Spitalfields, which eerily overlooks the spot where Mary Kelly and the Ripper are believed to have met, as well as the Old Truman Brewery and Brick Lane.

What is Dorset Street in the present day?

Today nothing remains of Dorset Street. Between 2015 and 2017 an office block was built over its former site.

How has Dorset Street changed since 1888?

Dorset Street had a very colourful history and was known throughout London for all the wrong reasons. Even before the crime, it was considered one of the most densely populated and crime-ridden thoroughfares in London. Later, it would be dubbed ‘the worst in London’ by the Daily Mail and was known by locals as ‘Do as you will street’ or ‘Do as you please street’ due to the apparent lawlessness.

Although the street has now disappeared, there are still two buildings that tower over its western and eastern sides. These are the Providence Row Night Shelter, which is now student accommodation for the London School of Economics, and the gleaming white tower of Christ Church Spitalfields.