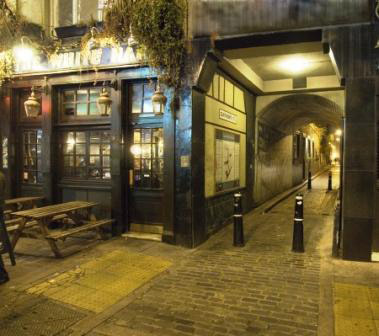 The White Hart pub’s claim to Ripper fame is its close link to one of the prime suspects for the killing spree. A Polish immigrant called Severin Klosowski, later known as George Chapman, worked in a barber shop in the basement of the White Hart. The murder of Martha Tabram, who some believe may have been the first victim of Jack the Ripper, took place no more than 50-feet from the back of the pub. But was he our man?

What happened at the White Hart pub in relation to the Jack the Ripper crimes?

Severin Klosowski qualified as a junior surgeon in Poland in 1887. Later that year he decided to move to London where he worked as an assistant hairdresser. The barber shop he worked in was located in the basement of the White Hart.

In 1891, Klosowski emigrated to America with his then wife Lucy Baderski. However, in 1892, Lucy returned to England after a violent argument with Klosowski, who followed her back just a few weeks later. In 1893, Severin started a new relationship with Annie Chapman. They split up shortly after but Severin chose to ‘borrow’ her name, becoming George Chapman.

George Chapman became a suspect in the Ripper murders after he was arrested for the murder of three of his wives in 1903. This gave rise to suggestions that he could have been the Ripper. However, there were also a number of inconsistencies that led investigators to believe this probably wasn’t their man.

Where is the White Hart pub?

The White Hart pub is one of few survivors from 1888 and is still serving pints on 89 Whitechapel High Street in the Borough of Tower Hamlets. It also has a side door that’s tucked away neatly on Gunthorpe Street. The closest tube station to the White Hart is Aldgate East, which is just a 2-minute walk from Whitechapel High Street, while Aldgate tube station is just 5 minutes away.

There are also a number of world-class attractions just a stone’s throw from the White Hart pub, with the Whitechapel Gallery just a few doors down and the Tower of London, another place with a gruesome history, just half a mile away.

What is the White Hart pub in the present day?

The White Hart Pub is still very much alive and kicking till this day, complete with period art and homemade signs that harken back to the time of Jack the Ripper.

How has the White Hart pub changed since 1888?

It really hasn’t changed all that much. There were some alterations made in both 1938 and 1969 and for a brief period in the 1990s the pub was renamed Clutterbuck’s, but much of what you see today is just as it would have been when Jack the Ripper was stalking these streets.