Dr Openshaw, one of the surgeons at the London Hospital, now called the Royal London Hospital, played an important part in helping to investigate the Ripper’s crimes. On 29 October 1888, a letter sent to the hospital and addressed to Dr Openshaw was signed by Jack the Ripper. It discussed his analysis of half a kidney which reputedly belonged to Catherine Eddowes who had been murdered a month earlier.

What happened at London Hospital in relation to the Jack the Ripper crimes?

Half a human kidney was first sent anonymously to George Lusk of the Whitechapel Vigilance Committee on 16 October 1888. This was allegedly the kidney that had been extracted by the Ripper from Catherine Eddowes. Lusk was encouraged to have it examined by a medical expert, and it was eventually submitted for examination to Dr Thomas Horrocks Openshaw, a surgeon at the London Hospital.

Dr Openshaw examined the kidney and allegedly concluded that: ‘the kidney belonged to a female, that it was part of the left kidney, and that the woman has been in the habit of drinking. The person died around the same time as the Mitre-square murder was committed.’

These findings were reported by the press. On 29 October 1888, Dr Openshaw received a letter signed by Jack the Ripper that discussed his findings. It said:

Analysis of the letter concluded that the author feigned illiteracy. It was also noted that the word ‘hospital’ was spelt correctly on the envelope but not in the letter itself.

Where is the Royal London Hospital?

The Royal London Hospital is located on Whitechapel Road, Whitechapel, in the London Borough of Tower Hamlets. Such is the rich history of the hospital, which dates back to 1740, that it has its own museum located in the crypt of St Philip’s Church in nearby Newark Street. This museum is well worth a visit because it displays a copy of the letter reputedly sent by Jack the Ripper to Dr Openshaw, as a well a sketch taken from the mortuary of Catherine Eddowes’ terrible wounds.

The closest tube station to the Royal London Hospital Archives and Museum is Whitechapel, which is located just a 1-minute walk away. There are also a number of other fascinating and historic attractions in the area including Wilton’s Music Hall, Brick Lane and the Tower of London, all of which are within easy walking distance.

What is the London Hospital in the present day?

Today, The Royal London is one of the best-known hospitals in the city and is home to the London Air Ambulance Service.

How has the London Hospital changed since 1888? 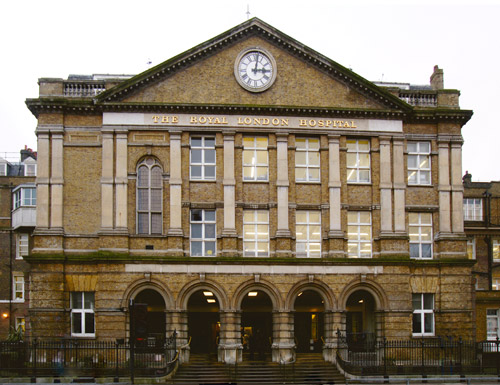 In 1895, the hospital became the first to offer preliminary training for nurses. In 1925, it was the site of the heart operation that was to become the basis for modern heart surgery. The hospital also played a major role in the treatment of the wounded from both World Wars and became part of the NHS in 1948.

Robbed At A Common Lodging House

The Jack the Ripper murders certainly did expose the conditions in some of the common lodging houses of Spitalfields, which were frequently portrayed as being little more than dens of iniquity by the Victorian media. It cannot be […]

The Homes Of East Enders

The murder of Alice Mackenzie took place in Castle Alley, off Whitechapel High Street, in the early hours of the morning of the 17th of July, 1889, and the inquest into her death took place over the course […]