Jack The Ripper In Court

An intriguing court case took place at the London County Sessions in August 1889 when a fireman by the name of William Wallace Brodie, aged 32, appeared on charges of having obtained jewellery by false pretences from Mr Peter Rigley Pratt, a Jeweller on Clerkenwell Road.

When Brodie initially appeared, the Clerk of the Court, Mr Sage, asked him of he pleaded guilty or not guilty, to which the agitated prisoner shouted in reply, “I ain’t charged with that; I am here for the murder of Alice Mackenzie.”

A plea of “not guilty” was duly entered and the prisoner was told to stand down.

That afternoon, a jury was sworn in and the accused again appeared in the dock, where he proceeded to clutch the rail. 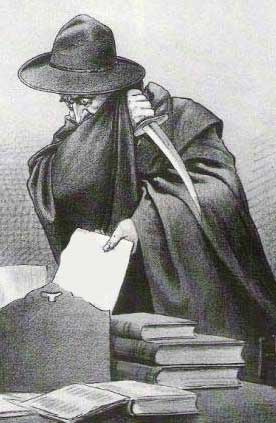 Peter Rigley Pratt was then called to give evidence and, the moment he saw him, Brodie rushed at him and tried to attack him, shouting, “there he is; he is one of the syndicate who are going to carry me about in a cage and exhibit me as the man who committed all the East-end murders.”

Brodie was promptly held back by the dock-warder, but became so violent and agitated that other warders had to be called up from the cells in order to subdue him.

The Magistrate asked the Chief warder what the prisoners state of mind was. He replied that he had been in custody for to weeks and had been examined by a doctor who had sent a certificate stating that the prisoner was “quite sane.”

Pratt was therefore sworn in, but the moment he entered the witness box, Brodie started grinding his teeth, and made another attempt to attack him effort to get at him. In fact he was so violent that it took “a dock-full of warders to hold him down.”

REMOVED TO THE CELLS

In the end the judge ordered that he be removed to the cells  and gave it as his opinion that, under the circumstances , the jury had better be discharged without giving a verdict, and the trial postponed until next sessions.  This was duly done.

According to the report in the Islington Gazette:-

CLAIMED HE WAS JACK THE RIPPER

“The prisoner is the man who made a statement at Leman-street Station to Inspector Moore that he was “Jack the Ripper,” and that he was the murderer of Alice Mackenzie. His story was investigated, it was found that there was no truth in it, and he was then charged with being a wandering lunatic. He made a statement to the Magistrate, who directed him to be charged on his own confession with the murder of Alice Mackenzie in Castle-alley. He was acquitted, and then apprehended on the present charge.”