When I was researching my book Uncovering Jack the Ripper’s London way back in 2006, I spent a lot of time delving through various collections of photographs that showed the streets of the Victorian East End as they were at the time of the murders.

I cam across two photographs that showed Osborn Street as it was in 1888.

Now for those of you not familiar with Osborn Street (and if you join our Jack the Ripper Guided Tour it’s one of the first thoroughfares you’ll see) it is a, fairly short, road, that connects the junction of Whitechapel Road and Whitechapel High Street with Brick Lane.

It was on Osborn Street that Emma Smith, the first Whitechapel Murders Victim was attacked in the early hours of April 3rd 1888.

She had been walking along Whitechapel Road when she noticed she was being followed by a local gang.

She turned into Osborn Street via the corner pictured below. 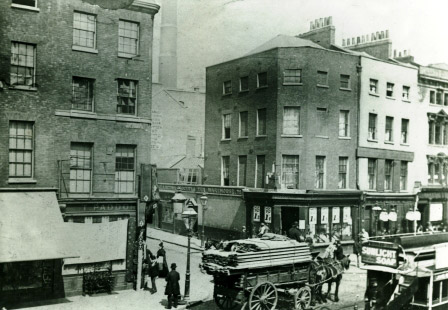 The gang continued to follow her as far as the point where it was crossed by Wentworth Street and became Brick Lane.

Here they attacked her.

Although she survived the attack, and was able to stagger back to her nearby lodgings, she died from her injuries a short time later.

Over the next few months many of the events surrounding the killing spree that we now know as the Jack the Ripper Murders would take place around the junction where Emma Smith was attacked.

In early August, Martha Tabram would be murdered one street along in George Yard.

At the end of August Mary Nichols would drink away her doss money in the Frying Pan Pub, a few short strides from this junction. Indeed, one of the last sightings of Mary Nichols would be at the junction of Osborn Street seen in the above photograph.

Several of the victims bodies would be taken to the Whitechapel Infirmary Workhouse located close by.

In the early days of the police investigation into the killings the prostitutes would speak of a character whom they had nicknamed “Leather Apron” who was threatening them in the vicinity of this junction.

And, almost all the Whitechapel Murders victims lived in the streets that were a few minutes walk away from the junction.

It is safe to say that, in many respects, the junction of Osborn Street, Wentworth Street and Brick Lane, was very much the epicentre of the Jack the Ripper crimes, which is why it features so early on in our walking tour of the crimes.