A sad fact of modern life is that more and more of the East End of London disappears with each passing year.

Often, the creep of redevelopment is a slow moving, so much so that you don’t tend to notice the wholescale effect it is having on our heritage. A little piece goes here, an old building goes there. But, suddenly, you notice that a massive chunk has vanished.

It has to be said that, sometimes, that redevelopment isn’t too much of a loss.

The area where Dorset once stood, for example, is currently undergoing a massive, and full scale, redevelopment and, whereas it is sad to see the change, it is also difficult to become emotional about the loss of the White’s Row Car Park.

What would be nice is if they would do what they’ve started doing around the backstreets of Cornhill and Lombard Street and place pavement plaques at some of the locations to notify casual strollers of their historical significance.

However, one part of East London that is under threat, and which will, most certainly, be missed, is Norton Folgate. If you’ve never taken a walk along this historic thoroughfare, and explored the streets around it, you’ve missed out on a truly historic part of London.

But, sadly, you might not be able to enjoy it for much longer as the property magnates want to redevelop the historic labyrinth of streets, alleyways and passageways of this time-warp neighbourhood.

As the Save Norton Folgate Campaign has put it:-

“Developers British Land, backed by the City of London, want to destroy Norton Folgate with wholesale demolition, constructing tall office blocks up to 14 stories with large floor plates – all within a designated Conservation Area. Founded in 1977 to fight the destruction of Spitalfields, the Spitalfields Trust has taken on both British Land and the City of London to stop this wanton destruction, and is offering instead to repair the old buildings in a Conservation-led Scheme.”

On 26th April 2016, The Spitalfields Trust will be taking London’s Mayor to the High Court for a Judicial Review over his “mishandling” of the planning application. If you are unaware of what happened, Tower Hamlets Council, actually listened to public opinion – people, genuinely, don’t want to lose this slice of the past – and rejected the planning application by British Land to redevelop the area.

What did Boris do?

He overturned the council’s decision.

Luckily, the Spitalfields Trust have refused to allow it to happen without a fight and, for the first time during his tenure as Mayor, Boris has been summoned to a Judicial Review to explain himself.

Of course, as anyone knows, legal action is, to be blunt, expensive, and so a fighting fund has been set up.

On Monday the 18th April 2016, at 7.30pm, a benefit concert will be held at Shoreditch Church to raise money for the fighting fund. It will feature Suggs of Madness, who is a genuine lover of this part of London. 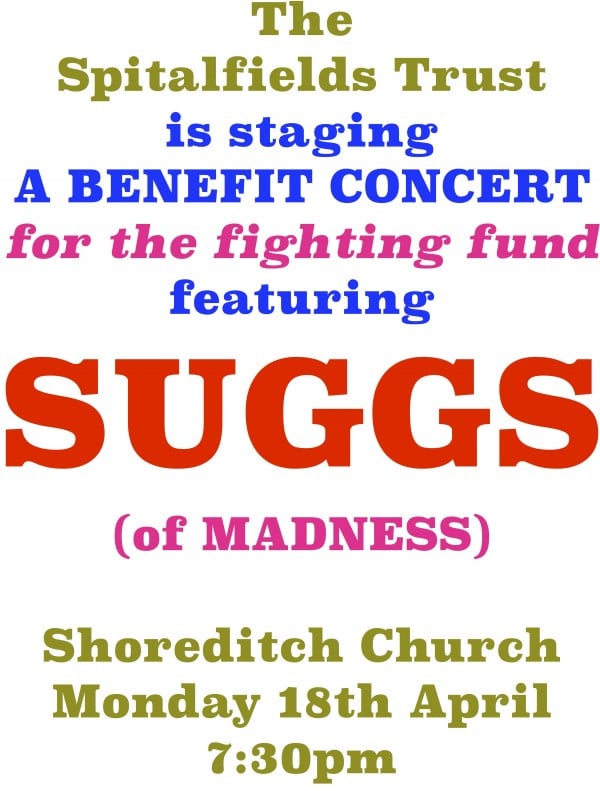 If you would like to attend, you can book your tickets via their Eventbrite page. Tickets cost between £10 and £20.

WHAT ELSE CAN WE DO?

Well, there are several ways that we can join the campaign to fight this.

Firstly, the more people who know about the threat and who can mobilise, so to speak, against it, the more chance there is of thwarting the developers.

In this respect, publicity is the key.

There are also more direct ways to help.

The main campaign, for example, has a Just Giving page that you can donate to here.

But, the most important thing about all this is that the more people know about this threat to our East End Heritage, the more people will speak out against it and, hopefully, the voices will be heard and, more importantly, listed to.

So, let a few people know (please feel free to share this blog if you wish) and let’s see if, on this occasion, we can stop a travesty being committed on the streets of Spitalfields – LET’S SAVE NORTON FOLGATE.

You can read more about the battle on this page on the wonderful Spitalfields Life website.